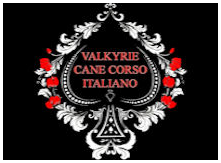 The Cane Corso is a descendant of the canis pugnax dogs used by the Romans in warfare. Its name derives from cane da corso, an old term for those catch dogs used in rural activities (for cattle and swine; boar hunting, and bear fighting) as distinct from cane da camera which indicates the catch dog kept as a bodyguard. In the recent past, its distribution was limited to some districts of Southern Italy, especially in Basilicata, Campania, and Puglia

The Cane Corso is a catch dog used with cattle and swine, and also in wild boar hunts. It is also used by night watchmen, keepers, and, in the past, by carters as a drover. In the more distant past this breed was common all over Italy as an ample iconography and historiography testify.

The breed was recovered from near extinction through the efforts of enthusiasts in the 1970s by means of cross-breeding appropriate type selected breeds. The Cane Corso of today is a very different looking dog in comparison to its pre-80’s forefathers. The drive has somewhat come down, the breed has more bulk and generally due to the shortening of the muzzle and widening of the skull it has lost its scissor bite. The Corso is now popular globally. Since coming to the United States in 1987, the breed has gained popularity. It was recognized by the United Kennel Club on July 15, 2008 under the name Cane Corso Italiano and subsequently by the American Kennel Club in 2010 as Cane Corso. Celebrity ownership of Cane Corsi has increased the breed’s visibility.